This is a free and open source (FOSS) recreation of Ninjakiwi's 2007 flash game, Rings. I enjoyed playtesting it so much that I decided to make it my first itch.io release!

Livestream where I developed v1.0: https://www.youtube.com/playlist?list=PLALx9d_ycE5uirkxkRsLFUqIMdwJptzIB

* space to put down ring early (or click the center ring)

* T to bring up theme switcher (colorblind players will like this)

* R to restart (only after game over)

* L to pull up the leaderboards (only after game over)

* P to pause (or unfocus the main play area)

* 1 - 6 to automatically send the ring currently held by the mouse to the corresponding ring stack (v1.5.3). I've been wanting to implement a QoL feature like this for a while. It's a little weird and takes getting used to, but let's face it, mouse controls aren't great for non-FPS games. Try it out, you might end up preferring it.

* C to pull up the console in-game. This is for debugging purposes and isn't useful for players, but if something appears broken, this could shed some light on that to aid bug reports.

* A (Button 0) - press to pick up ring, release to drop (equivalent to click)

How to play: Stack smaller rings onto bigger rings, bigger clears get bigger points, but don't get too greedy. If the ring on the top of the stack is the same size or smaller than the ring that falls on top, it's game over. 10 clears = 1 round. New rounds clear all the already-dropped rings off the board. Use this to your advantage.

This game is a lot harder than the original flash game. The typical run is expected to  end at round 8-10 rather than round 15-20. The pace picks up faster and I spent a lot of time polishing little things.

If you get an anticheat notice but you didn't cheat, let me know and try to give steps to reproduce the false positive. Submit an issue or leave a comment

The game is currently broken in the itch desktop app and I have no means of debugging it. You will have to play the game in the browser until itch fixes whatever is wrong with the desktop app.

The LB server is having issues at the moment. Apparently it crashed. We are aware of the issue and are working to fix it.

the issue appears to be resolved

The game is free, but if anyone wants to throw some donations my way, I would be forever grateful :) 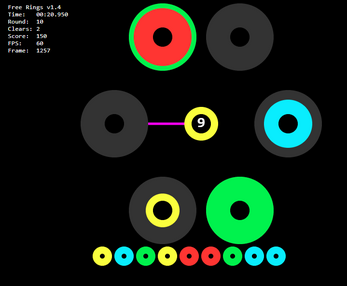